Wordless Wednesday: Football on the Brain 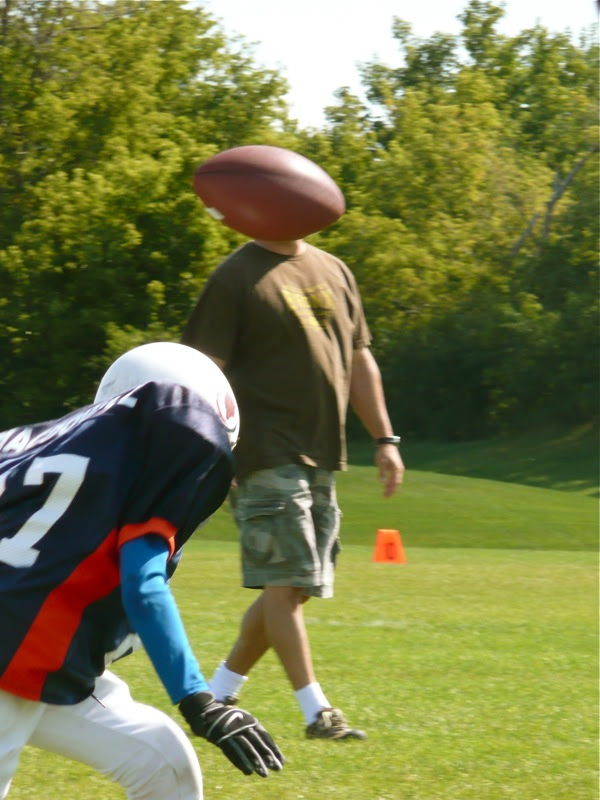 Wow! Wow! I would have gotten a picture like that...but not on purpose...I am a horrible picture taker!

And I just saw your comment...I have to say that after the last two days I am scared to do anything controversial. And my post wasn't intended to be controversial. I was seriously scared to read the comments after I realized what was happening. Thus the disclaimer.

Great photo - timing is everything.

Oh my goodness...I thought you had photo shopped this one until I saw Deb's comment. That is too funny!!
Yep, we're full swing into football 4x a week with our three guys as well. It's our life right now, isn't it?
And as far as controversy....oh, I would love to stir the pot on other people's blog....just not my own...hee hee. Today's post was definitely my most serious. No bedlam in that one. :)

It's true, I definitely couldn't have gotten this if I had tried. This one is thanks to the continuous shoot on my camera--Ben was trying to tackle this guy and I was shooting away. This is why it's so fuzzy (I was moving), but we laughed our heads off when I uploaded it.

OMGosh that is too funny!

What a catch! Haha and the title fits perfectly with the picture!

That is an AWESOME picture!!

That photo is PRICELESS!

BTW: there is a little award waiting for you over at my blog.

Thanks for visiting me yesterday via BATW :)

I love it! Great picture!!!

OH that is SOOOOO my Hubby this time of year. And he is passing it on to our oldest son.

Thanks for much for coming during yesterdays layover.

I don't think it could have been timed any better. Now you just need to paint one of those creepy faces on it.

That's a printable and framable picture, in my opinion. Especially if you know the dude with the football head.

Oh, and I love how you didn't have to give any explanation. Picture says it all!

Nice to come visit you again. Thank you for coming by my place yesterday on our BATW tour! I hope you visit again!

Okay, that's just hilarious, both the picture and especially the title! Love it!

Love that photo! Reminds me of my son!

This photo is awesome!!

Great Picture! Stopping by via SITS!

That's great! That reminds me of a certain pic I have that is a little less than flattering, but would certainly draw some laughs. I'll have to hunt it down and post it! Hope you're doing well.

Oh my goodness, that is an awesome shot!