The Lord is My Shepherd
I had the privilege of spending this past weekend with a very sweet group of women from our church on a retreat. The retreat center was a beautiful, serene setting, and although rain was predicted, we enjoyed a full day of warmth and some sun on Saturday.

The theme of the retreat was the twenty-third psalm. Though the psalm is comfortingly familiar, we were given many insights and experiences to help us understand far more deeply the significance of its beautiful imagery. 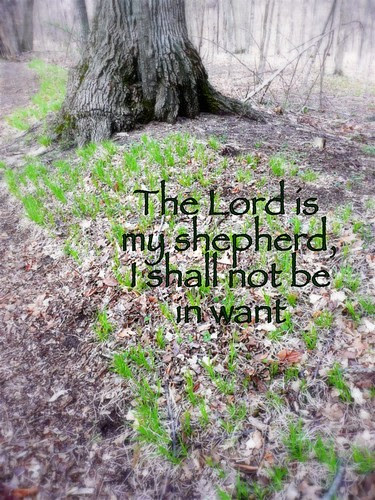 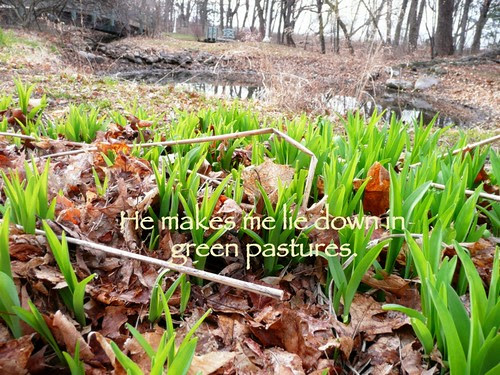 I didn't realize what a desert region the Psalmist was describing with the reference to green pastures. We think of the lush green fields you would expect to find in, say, Ireland. After all, the promised land was flowing with milk and honey, right?
Well, it turns out that there was enough for those sheep to eat, but really, just enough for today. The sparse vegetation could sustain the flock, but the flock must be on the move. But the shepherd always knew where the next meal would come from! 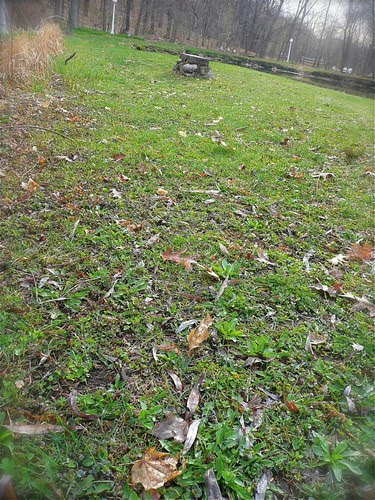 And very much like that, God meets all my needs. If I am worrying about how tomorrow's needs will be met, well, he won't be too likely to concern himself with handing me the map to the next pasture. Why would I need a map, when he's going with me? He wants me to keep my eyes on him, to trust him, and follow him. He knows where he's going.
Quiet Waters 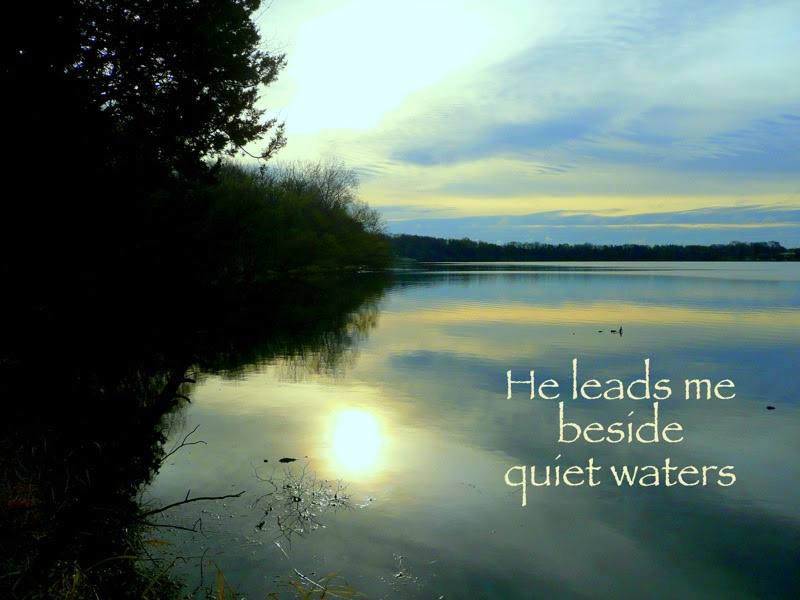 I love water. I love to look at it. I love to paddle on it and swim in it. And I love to drink it. Which is a good thing...my life depends on it.
On our retreat we learned the reason for the distinction of quiet waters. For there are treacherous waters nearby to be avoided. The sheep don't know the difference. They only know they are thirsty. They will drink from the wildest of waters. But the Shepherd knows. 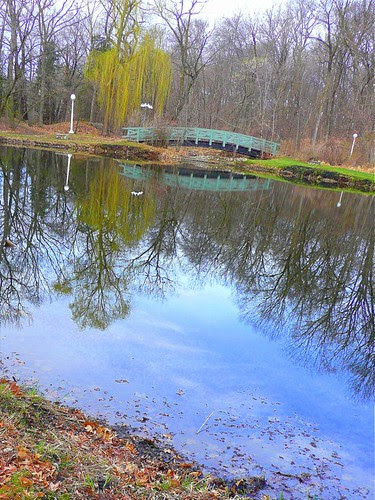 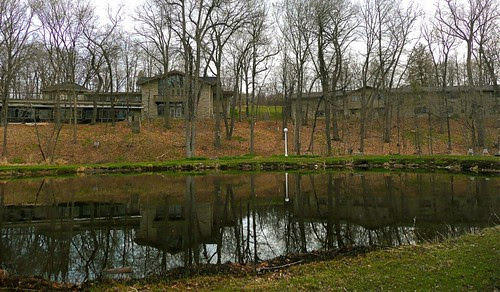 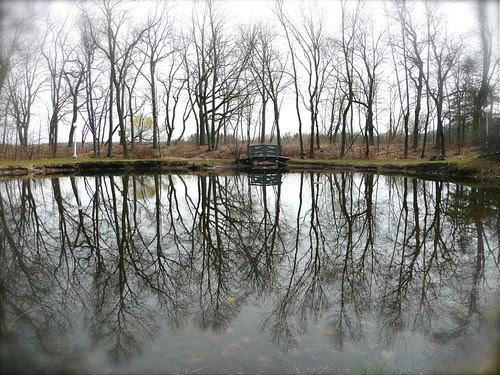 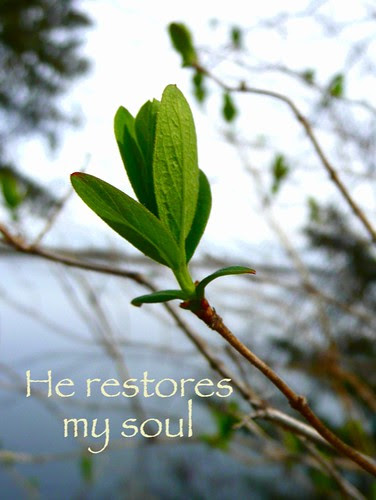 We've had a long, severely cold winter here. It never ceases to amaze me that all these trees can look so completely dead for so many months, and then in only a week's time spring back to life in all its glory. They have literally been storing up life, in order to be restored. 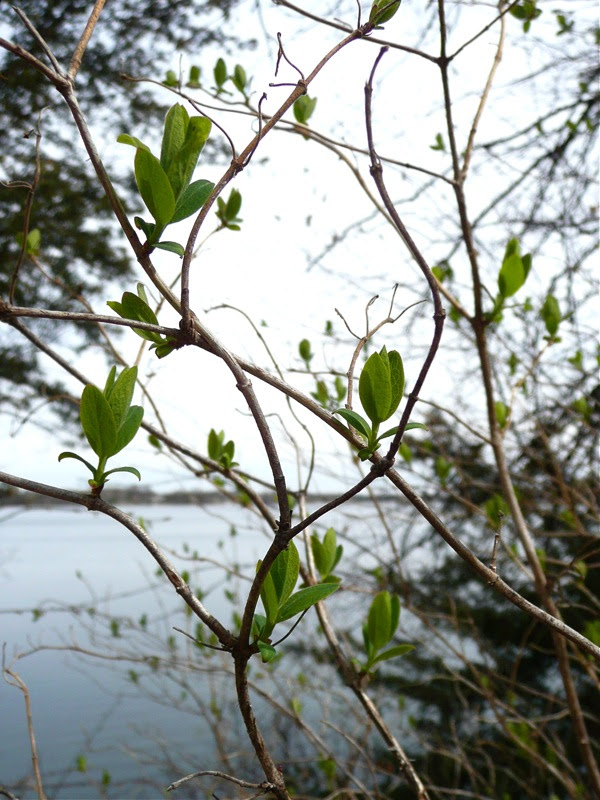 I can get so down on myself when my soul feels barren. But I have discovered that barrenness can be a clean slate. There is so much of God that I do not see. The best way to get a better look at something big is to take a step back. I do not like the feeling of that space between myself and my God. I do not like the fact that the appearance of the new facets of him that I had not seen before make him somehow unfamiliar. 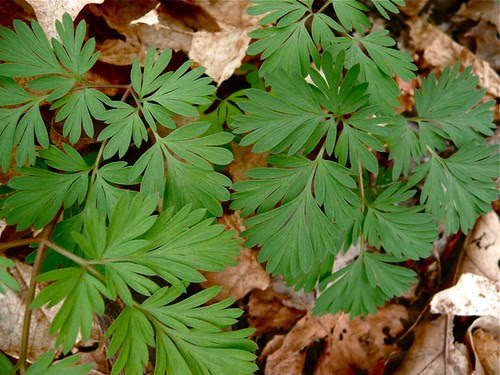 But when the unfamiliar settles in, I love the new perspective, and the sense that I have grown. I love my Savior with more of my mind...and my heart, soul and strength follow. 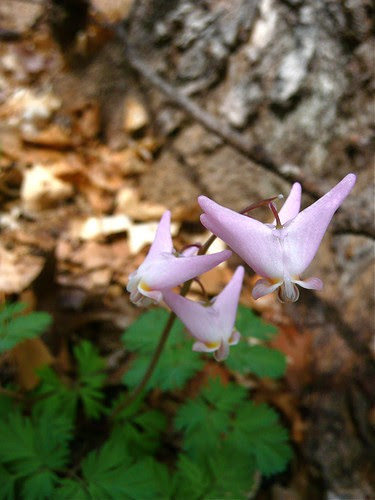 Barrenness can be purposeful, the restored soul stronger and more beautiful than before.
My Guide 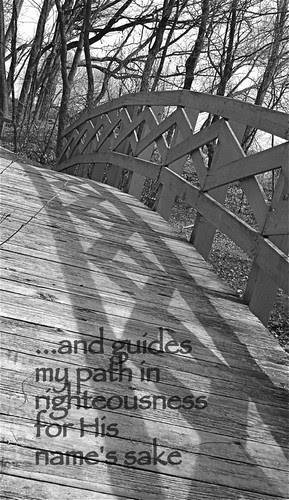 There's not a whole lot of righteousness or unrighteousness about sheep. They just do their sheepy thing. But the condition of the flock is a reflection on the shepherd. The sheep will follow him anywhere, so it is his job to guide them carefully. His reputation depends on it.
We serve a righteous God. If we follow him in faith, he promises to guide us carefully. He doesn't promise that the path will be straight, flat and smooth. He does promise to be trustworthy in his guidance. He knows the final destination is worth some precarious paths. And he knows that the more we follow him, the more we reflect him. 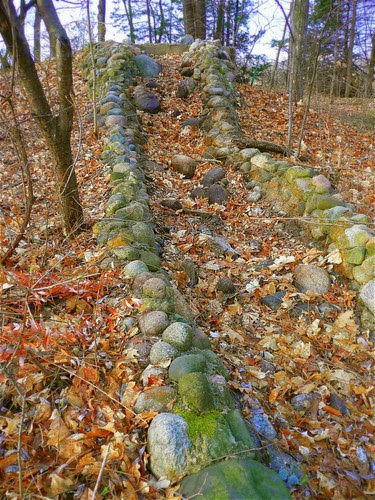 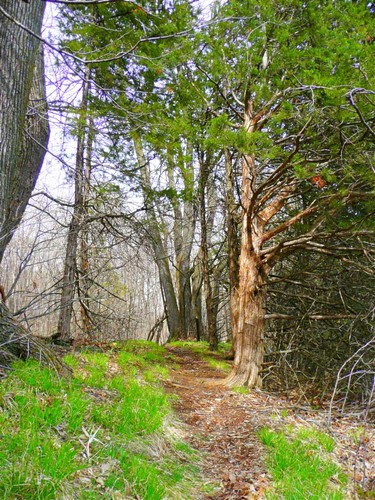 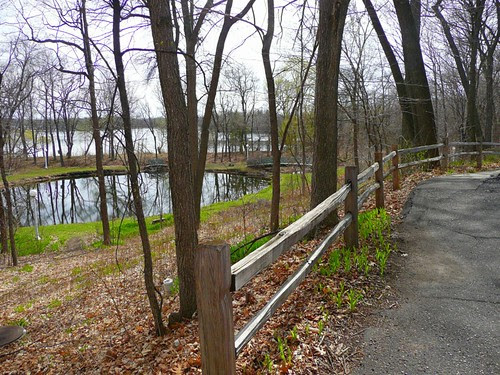 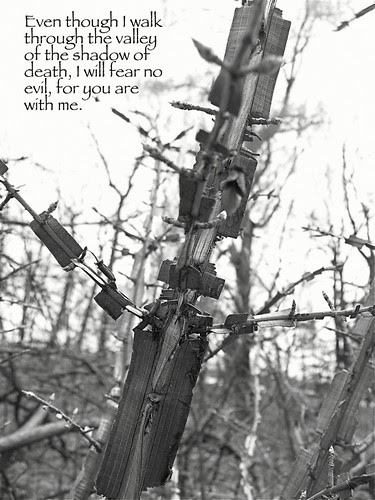 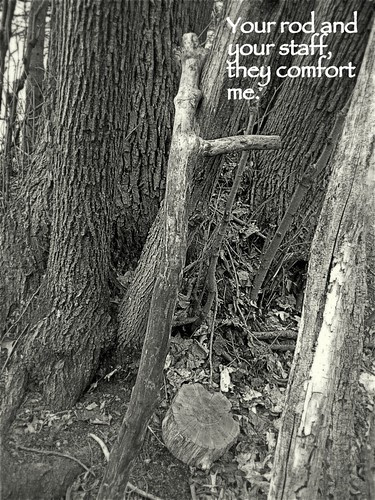 Jesus said, "Come to me all who are weary and burdened, and I will give you rest. Take my yoke upon you, and learn from me, for I am gentle and humble in heart, and you will find rest for your souls. For my yoke is easy, and my burden is light." Matthew 11:28-30

The Table
Whew, we made it through the valley. There's something about it that just leaves a girl speechless. And well it should. 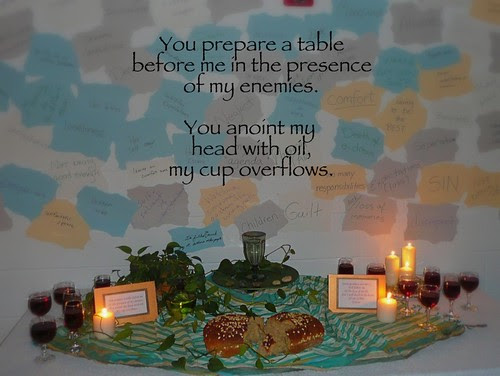 We have finally arrived at my favorite of the lessons on our retreat. Believe me, this photo does it no justice.
The image of the real shepherd leading his sheep to "the table" referred to higher ground, a table land or mesa if you will. There is more moisture there, and a far more lush place to graze, especially when the country below is hot, dry and barren. The path can be very difficult, and there are more predators along the way than there would be on the lower ground. But a feast awaits, and all will be satisfied. The shepherd will be on guard to provide protection. The sheep need only to help themselves to the meal before them.
On Saturday night of our retreat, we were given the task of brainstorming the hinderances to our following "The Shepherd". Some did so in groups, some on their own. Some were common obstacles, others deeply personal. In the end, the leader taped them up on the wall.
Sunday morning for the worship service, a beautiful, bountiful table was prepared for communion. This was no small taste of our Savior's passion. It was a feast. And while it was not served by a person, the very table invited us to eat, drink, and be satisfied.
But behind the table was the wall of hinderances to our following. Some of them were quite ugly. Abuse. Death of a loved one. Illness. The loss of a dream. Depression. Anger. Some of them were merely circumstantial limitations. Caring for young children or aging parents. Menopause. The contrast between these and the beautiful table was stark. And it hit me.
"You prepare a table before me in the presence of my enemies." How often my attitude says to God, in effect, "Make my enemies go away, and then I will commune with you." He wants to satisfy me as I allow him to deal with my "enemies", but I want none of it.
So I sat and ate. I drank my whole glass of juice (we are Baptist, after all). It was delicious. And satisfying. I pray it's a lesson I will not soon forget. 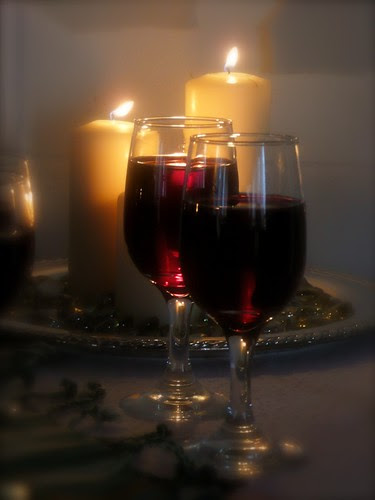 For truly, my cup overflows.
And whatever enemies I may have
are no match for Him.

Anointing
"You anoint my head with oil; my cup overflows."
Anointing. In the interest of full disclosure, while I managed to photograph pretty much every element of the 23rd Psalm on the grounds of the retreat center, there was not a whole lot of anointing going on. Nor were there any shepherds, or even sheep for that matter. When we saw a video about the life of shepherds and sheep in the hills surrounding Israel, they didn't cover anointing either! Leave it to me to think, "Hey! What about the anointing?"
Sure enough, our perceptive leader answered my unasked question in the next session. She told us that the oil was used for several purposes. For one thing, it was a salve for any sores. Hmm, medicinal purposes...healing! 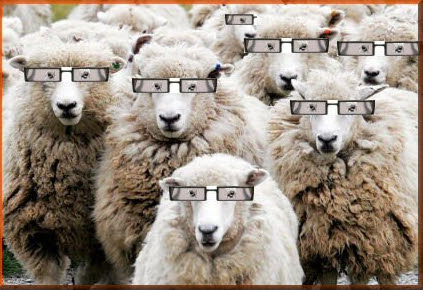 OK, so this is a different kind of medicine altogether, but it's the best I could do. Someone was taking extraordinary care of these sheep is my point.
Oil was also used on the heads of the rams during mating season so that when they had their showdowns with each other their heads would glance off each other and they would be less likely to seriously wound each other.
A third purpose, however, really intrigued me. The oil was smeared on the sheeps' noses as an insect and snake repellent. When they were feasting on the table lands, there were often adder holes in the grass. The shepherd also put oil around the hole openings he saw to keep the snakes from getting out, but even if one came to bite a sheep on the nose, it would slide off the oily surface first. There were also flies--referred to as "nose flies"--that would swarm around the sheeps' noses if they were unprotected, and even burrow and lay eggs in their nostrils. Obviously this was most annoying and quite a nuisance.
I thought about the things that annoy and "bug" me. There are some serious recurring themes, I must say. The deepest burrowing goes on closest to home. I thought, AHA! An anointing is exactly what I need--something to make these nuisances slide off instead of festering. That made me smile, and since that lesson, I have found myself several times saying, Lord, anoint me so I can let this slide! Amazingly, it helps!
How perfectly this accompanies the challenge to accept the invitation to feast in the presence of my enemies. With head anointed, I can focus on my Shepherd's abundant provision, allowing him to deal with the threats to my inner peace.
God's Sheepdogs 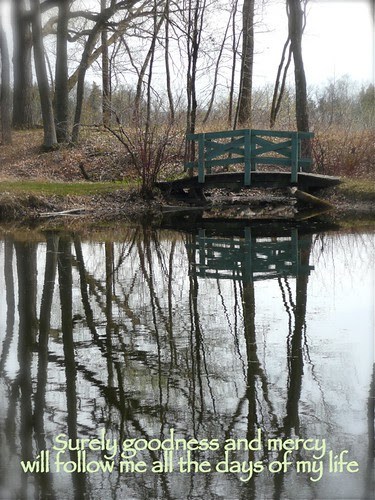 At the end of the day, it is time for the shepherd to take the sheep home to the pen, where they can rest in safety. Throughout the day he has led the way, and while most of the sheep have followed, somebody has to herd the stragglers back onto the path. That's why the shepherd has his trusty sheepdogs to follow the flock and make sure they get home. The "sheepdogs" in the psalm are some wonderful characters: Goodness and Mercy.
Here is one of the things I love most about my Heavenly Father: He pursues us. He did it for me, and He has done it for my husband and kids. Once He gets your attention, you can't help but notice how irresistible He is: the kind of God who trails us with his goodness and mercy. Not guilt. Not legalism. Not fear. And once he catches up with us, HE STAYS. All the days of our lives. Because we might get off the path, or stuck in a thistle bush. He'll be coming right behind us...with Goodness and Mercy. 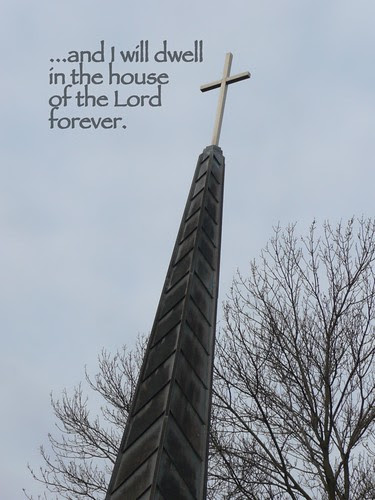 Forever! I can't even imagine, but I sure have fun trying. Oh to be truly HOME in the presence of Christ. I may not be home yet, but at least for today, I choose to let Him guide me on my way there...being careful not to get ahead of him so I can bask in His goodness and mercy.
Note: Our leader used the book Traveling Light by Max Lucado as much of the foundation of her teaching for this retreat. I would highly recommend it, along with the fiction classic, Hinds' Feet on High Places by Hannah Hurnard, which gives a stunning depiction of God as our shepherd.
Posted by Tracy P. at 10:00 PM No comments: