Thoughts on Santa and faith 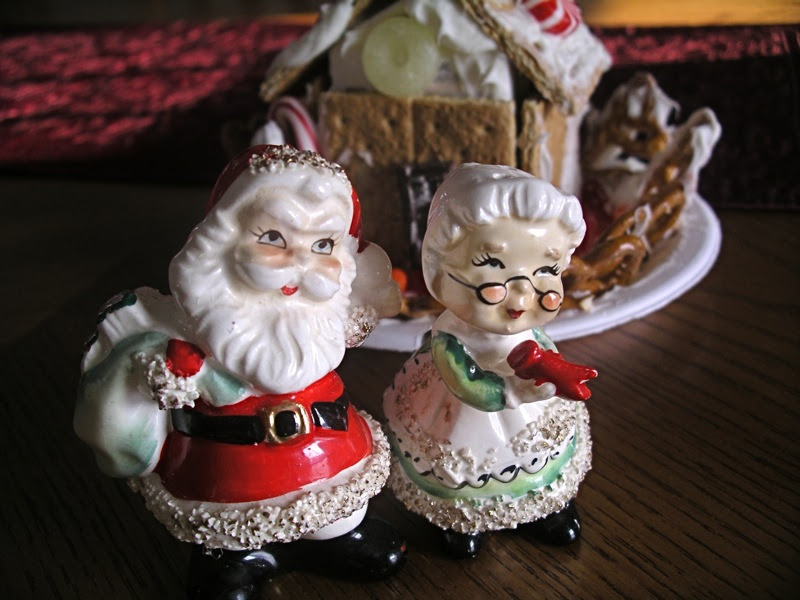 This morning our eight year old got out of bed, went to the kitchen and turned on all the lights. Very unusual, since he has an aversion to bright light first thing in the morning. When I got to the kitchen he said, "Santa is sure to find us with all these lights!" A true believer.

By the time he was four, we knew we really needed a plan for how to handle Santa. We're not really into the buildup about gifts and thinking up a list of things we want. (Part of our "contentment thinking" philosophy. More about that here.) But Santa is inevitably, and happily, part of Christmas in America, and what parent really wants to suck the fun out of Christmas? We asked around about people's experience with Santa, and resonated with the friend who said her parents basically didn't give any indication one way or the other.

So I took the kids (then ages 4 and 2) to the store one day, and let each of them pick a roll of wrapping paper. (Hot Wheels and Dora.) They were already telling us that Santa was coming. On Christmas there were presents wrapped in their chosen paper with no tags indicating "to" and "from". The kids immediately identified which ones were theirs and credited Santa (who, by the way, had impeccably good taste in gifts for a guy who hadn't been given any direction!). Ben was more than astute enough to have made the connection between the paper he chose and the gifts he opened.

It's been fascinating to watch this pattern of belief unfold. This year for the first time I'm told there must be cookies left for Santa. "Really? Well, cookies it is then." (Bethany is saving some that she decorated at church a week ago.)

And what does this have to do with faith?

I recently read this quote from C.S. Lewis from an essay describing his use of fantasy to convey spiritual truth. "I thought I saw how stories of this kind could steal past a certain inhibition which had paralyzed much of my own religion in childhood. Why did one find it so hard to feel as one was told one ought to feel about God or about the sufferings of Christ? I thought the chief reason was that one was told one ought to. An obligation to feel can freeze feelings."

I've been doing some online reading these days that has caused me to reflect on whether we're teaching our kids that faith, worship, giving and service are obligations based on how they "ought to feel about God or about the sufferings of Christ". Honestly, we have tried not to do this, but rather to set the example of putting our own love for Christ into action. It's good to check ourselves, because we could run the risk of sucking the joy out of the journey of faith for our kids if we try to determine the course for them.

I'm NOT advocating that we should try to avoid influencing our children's faith foundations. But I am wanting to be intentional about letting God be God in their lives. I want to allow Him the freedom to woo them into relationship, just as He did me. I want them to respond to Him in love and gratitude as He shows them who He is. I want to be sure not to throw obstacles of legalism in their path that would confine them to a religion of duty rather than a love affair with an almighty God and merciful Savior who calls them "my child", and "friend".

There can be no doubt that our kids have chosen Santa for themselves, by following the example of other joyful believers. And so far they have also chosen Jesus. May we encourage them to own their relationships with Him, much more by our joyful following than anything we tell them they must do or think or feel. 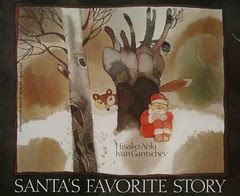 (Note: Santa is also a joyful believer who points out the real meaning of Christmas in Santa's Favorite Story by Hisako Aoki. HIGHLY recommended!)
Posted by Tracy P. at 7:56 AM 5 comments:

Email ThisBlogThis!Share to TwitterShare to FacebookShare to Pinterest
Labels: Reflections on Parenting

On the eighth day of Christmas...

We love to take Christmas light drives in December, and didn't get to it until last night. We went to some new places and hit the jackpot--TONS of really nice lights! Bethany provided the running light commentary. "They're ready!"... "They get a lump of coal!" This house is my personal favorite, thanks to my husband who is not only industrious, but also is not afraid of heights. We're ready!

The kids wanted to sing the 12 days of Christmas while we were driving around. They couldn't remember all of the words. Lee would prompt them a little, and when we got to the 8th day, he said, "eight maids a ...." to which Ben said, "uh...dusting?" So from now on around our house, it's eight maids a dusting. I hope they get here soon.
(Originally posted on Tracy's Scrapbook)
Posted by Tracy P. at 7:56 PM No comments:

A season of preparation 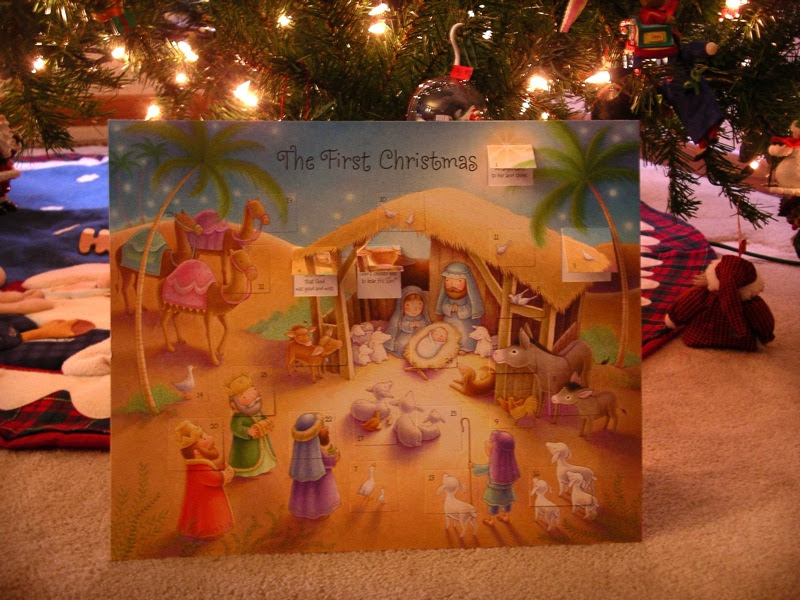 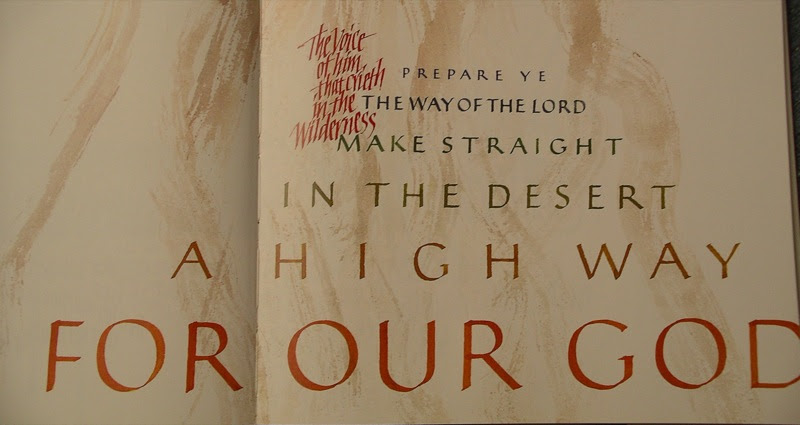 Happy Advent!  This is one time of year (and Lent is the other) when I really appreciate the sense of reflective anticipation that was instilled in me through my liturgical heritage.  We evangelicals tend to forget that a season of waiting is a season of preparation.  We are so eager to jump to the happy ending that we tend not to have the patience for the tension of the chapters of climax.

Or in this case, the silence between the chapters.  More than four hundred years between the old and new testaments of scripture.  How's that for a pregnant pause?

The scripture photographed above is the beginning of Handel's Messiah (rendered in calligraphy by Timothy Botts--breathtaking book!!).  The text of Messiah does the most amazing job I've ever seen of capturing scriptures that illustrate the need and waiting for a Savior, and the fulfillment of the promise.  It is packed with paradox, and has made me love the prophets.  It has caused me to realize that all of history--in fact, all of eternity--rests on a BUT. Listen...

"For behold, darkness shall cover the earth, and gross darkness the people, BUT the Lord shall arise upon thee, and His glory shall be seen upon thee, and the Gentiles shall come to thy light and kings to the brightness of thy rising." (From Isaiah 60:2-3)

The writer of the book of Hebrews puts this spin on the BUT:  "In the past God spoke to our forefathers through the prophets at many times and in various ways,..." (and then He was quiet--though not absent--for centuries!) "...BUT in these last days he has spoken to us by his Son, whom he appointed heir of all things, and through whom he made the universe.    The Son is the radiance of God's glory and the exact representation of his being, sustaining all things by his powerful word." (Hebrews 1:1-3a)

His WORD.  After 400 years of silence.  "In the beginning was the Word, and the Word was with God, and the Word was God.  He was with God in the beginning.  Through him all things were made; without him nothing was made that has been made.  In him was life, and that life was the light of men.  The light shines in the darkness, but the darkness has not understood it. ...The Word became flesh and made his dwelling among us.  We have seen his glory, the glory of the One and Only, who came from the Father, full of grace and truth."  (John 1:1-5, 14)

A business is born! 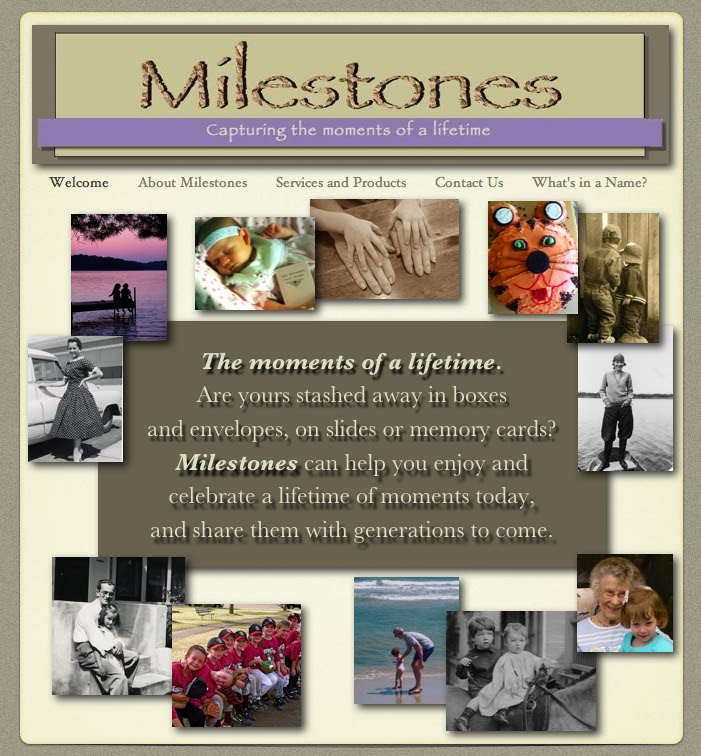 It's official...I'm now the proud owner of a small business!  I've launched my website and I'm ready to go.  (If you want the web address, comment and I'll email it to you--I'm not posting it here for privacy reasons.)

I can hardly wait to start building people's photos into DVD keepsake scrapbooks.  Figuring all of this digital stuff out has been an exciting adventure.  I'm thankful for all of the amazing memories in my own life that have given me the vision for a service like Milestones.
Posted by Tracy P. at 2:59 PM 4 comments: