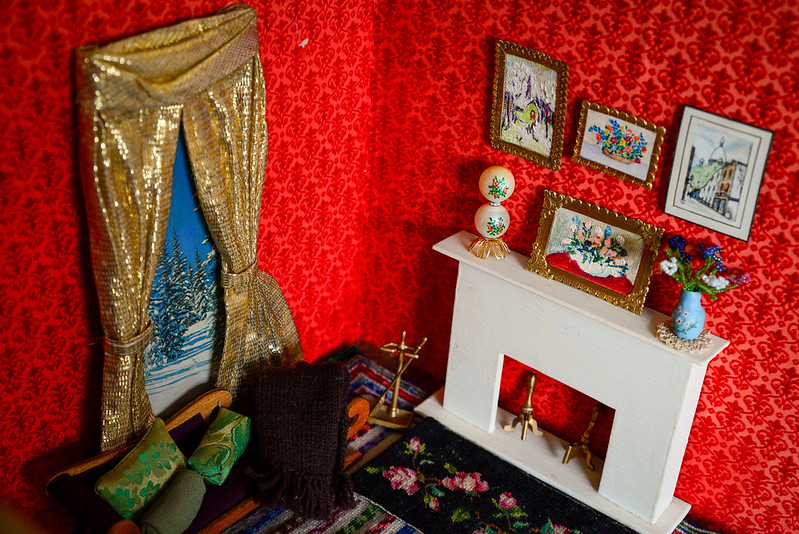 I recently spent some time unpacking an old family story. You know the kind in boxes, waiting to be "dealt with". This one was handed down to me because I was the girl with a girl. It was a story I really didn't want to own. 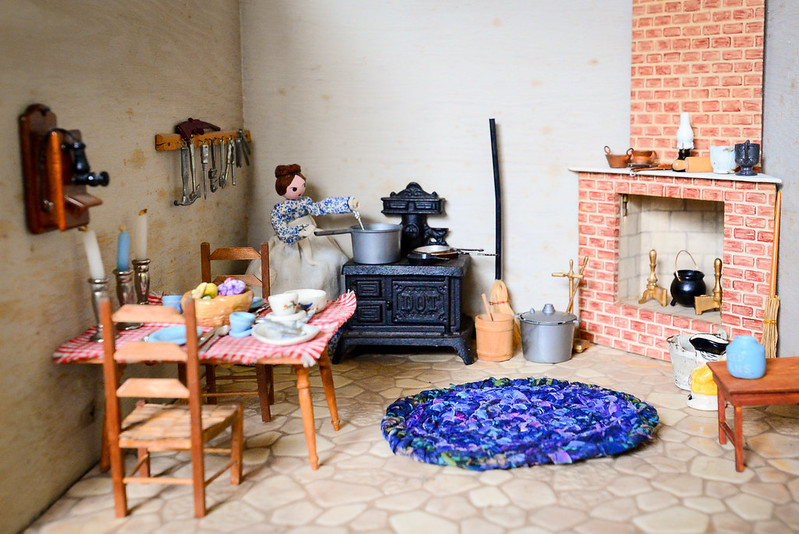 When my sister and I were young, our Great Aunt Molly made us a "dollhouse". Much ado was made about this gift while it was in the works, and Aunt Molly would tell us about it with delight. I was never much of a doll person, but hearing her animated descriptions, I was more than a little intrigued. 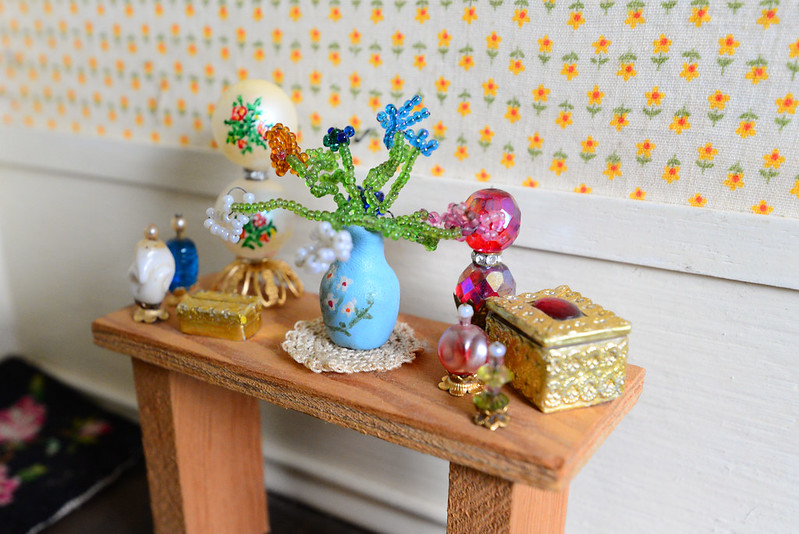 Aunt Molly was an artist with an eye for detail. She had a grandiose vision for this "house". It was to be a mansion with ornate furnishings that were mostly handmade, and filled in with sweet little miniatures she acquired from her sources, most of which were mail order catalogs. She loved announcing items newly arrived from New York. 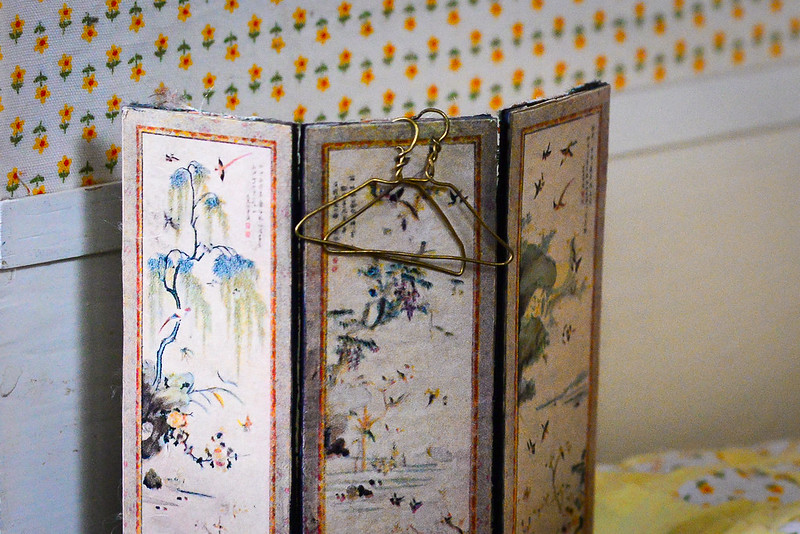 When this "house" finally reached a point of adequate completion to be shipped to us, it came in large cartons. I can only imagine the anticipation that had built up over some years of hearing its stories, and the excitement when they arrived. 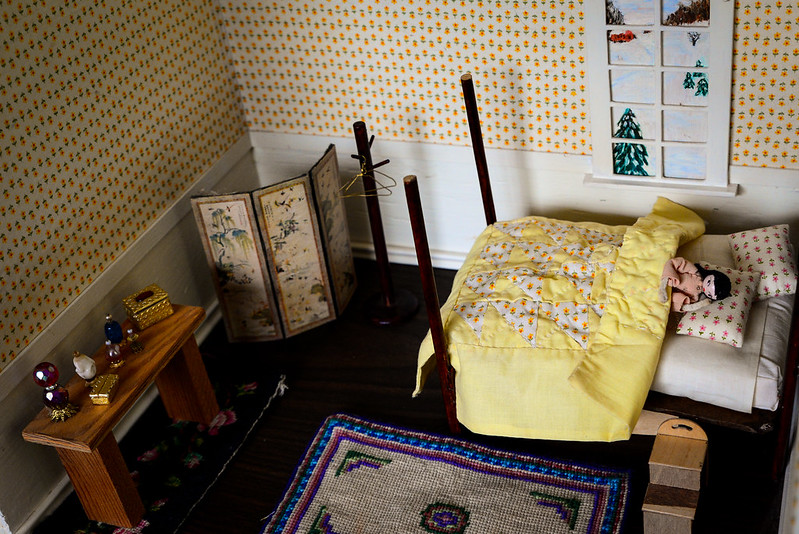 It turned out that the "house" was actually three large plywood boxes, all separate and unfinished on the outside, each representing a room in this home. Not quite what I envisioned. There was a kitchen, a living room and a bedroom, each with elaborate decor, and a letter telling the story of what was and what was yet to come. 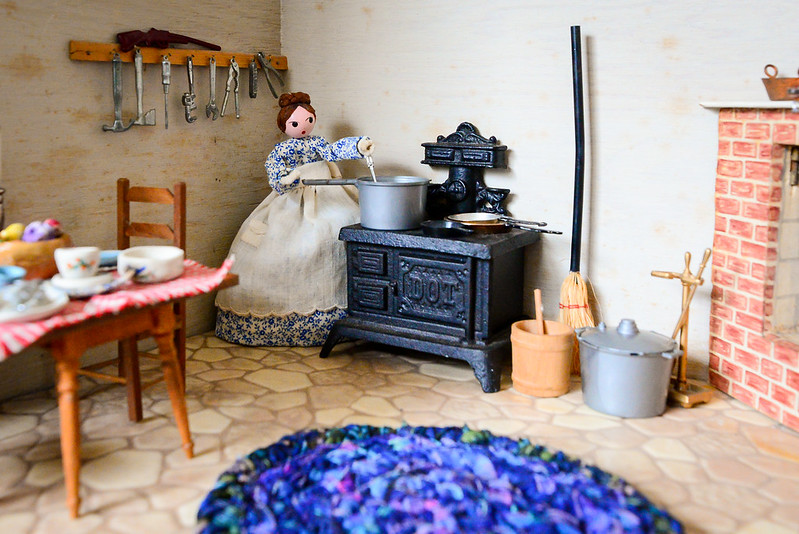 With the house were two handmade dolls, a mother and a daughter. ("The man", would be a future addition, newspaper in hand, but he never showed up.) The daughter was, per her letter, "an invalid child" (did she realize the word said in-valid?), who could "sit and lolligag on the chaise". The expressions on each of their faces looked angry. I wanted nothing to do with them. I rejected their narrative. Over the years, I forgot why it was that Aunt Molly's dollhouse was not a source of warm fuzzies for me, I just put it out of my mind. 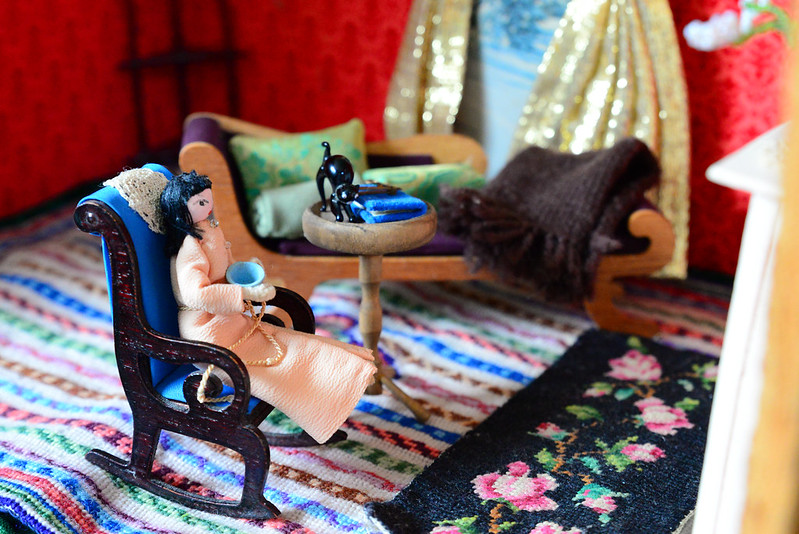 You can imagine how thrilled I was when, decades later, the boxes eventually found their way to my house so I could share them with my then teenaged daughter. I knew she'd be as impressed as I had been. So they've been sitting awhile, waiting for me to deal with them as I'm trying to reclaim space and uncover treasures. My real intent was to get rid of them, but I thought I might photograph some of the details, like her tiny paintings, to remember and enjoy with my siblings. I was unprepared for the sense of dialogue I would have with Aunt Molly herself as I paused for a closer look at her handiwork. 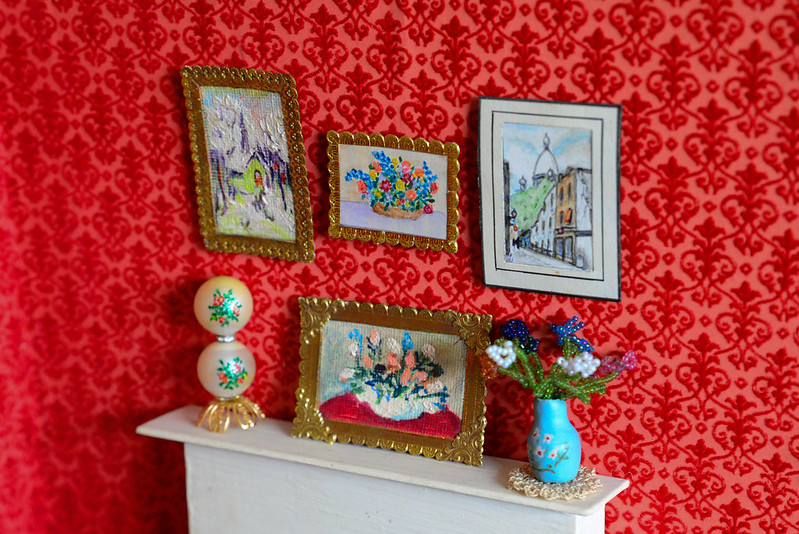 Aunt Molly was a single career woman in a man's world.  I heard her called a "spinster" and an "old maid", because in those days those words were used interchangeably with "single woman". Beyond that, Aunt Molly was more than a little eccentric. She would come stay with us for several days at a time, being from out of state. She was a chain smoker--you could see it on her fingers and her teeth, and hear it in her constant cough, especially whenever she laughed uproariously at her own jokes that always ended in a coughing fit. I never really knew what to make of her. 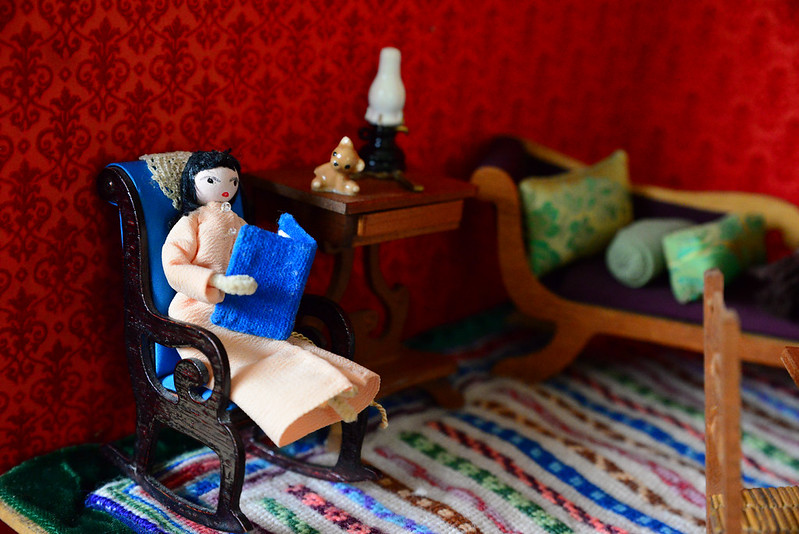 As I began to put the pieces of the dollhouse together, I gained a new appreciation for Aunt Molly, and found myself wondering about her. Why on earth did she decide this little girl doll was an invalid? Had she ever felt in-valid for being who she was? Had anyone dear to her had polio and ended up unable to walk? What was the rest of her story? It was clear that, though she thought we'd be as delighted about the house as she was, it gave her a way to spend a lot of time and creative energy that gave her joy. 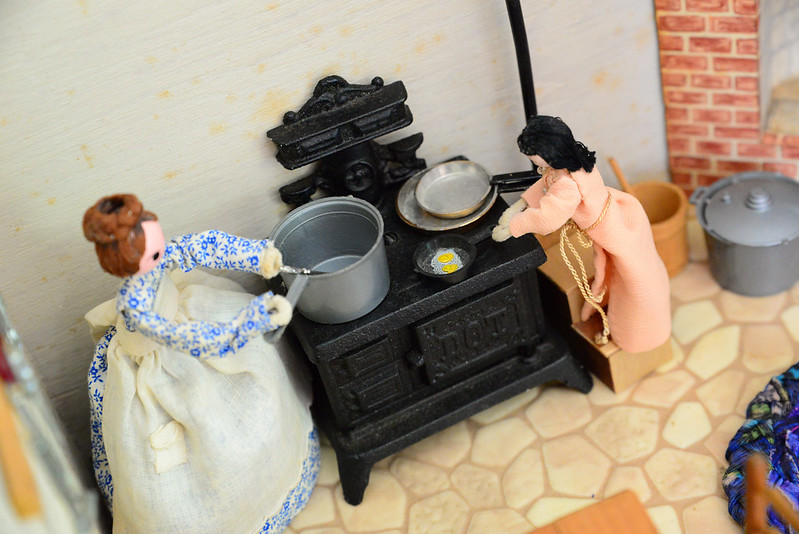 It occurred to me--Aunt Molly started the story, and though I rejected the narrative, it was now mine to shape as I liked. What if the girl in her bathrobe was home because it was a snow day? What if she was happy to stay in her jammies and drink hot chocolate? What if she and her mom embraced the extra time by making a big breakfast together? 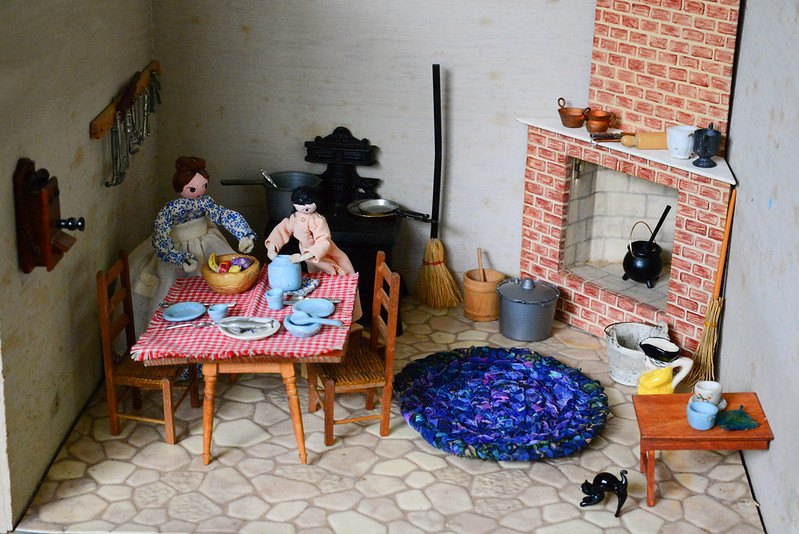 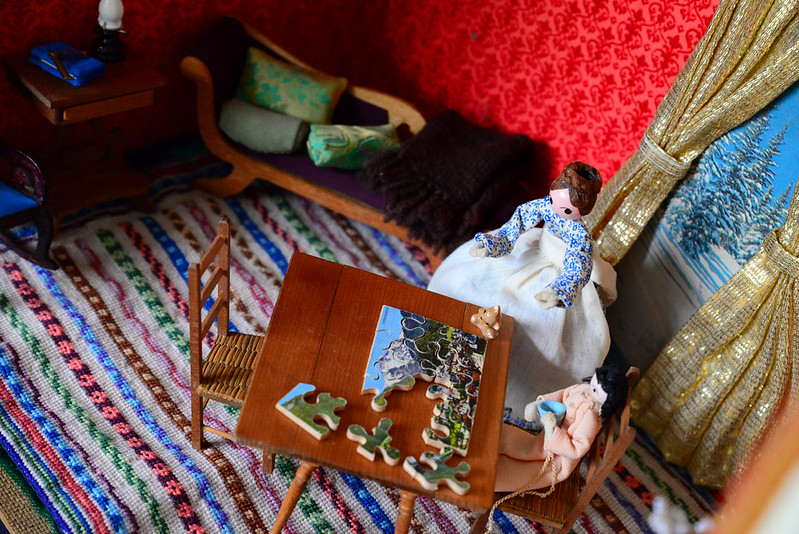 After that, maybe they'd work a puzzle together? What if their faces weren't angry, but intent on finding the right pieces? Aunt Molly would be ok with that, wouldn't she? 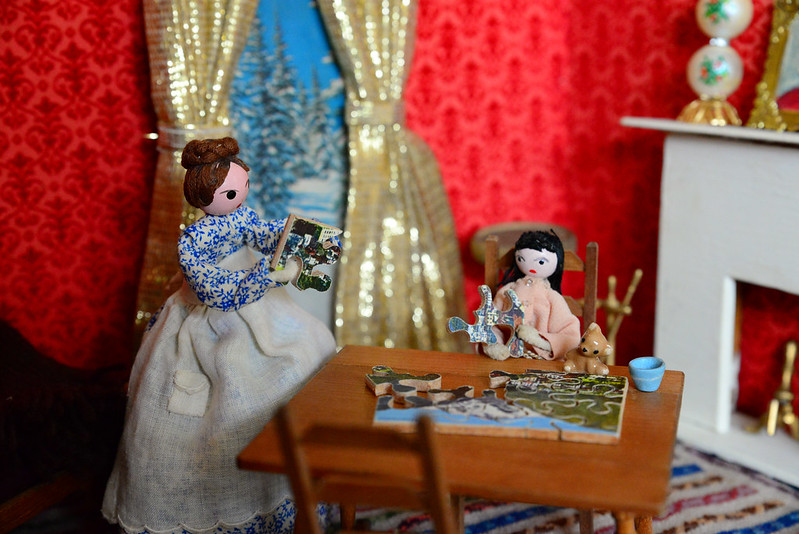 I got to thinking about the way our family stories come to us, and how we affect where they go next. Much has been said lately about the way we deal with our history, especially the inconvenient or unconscionable parts of it. Is it disrespectful to want to change the narrative? Is it dismissive of those who came before us? Is it arrogant? 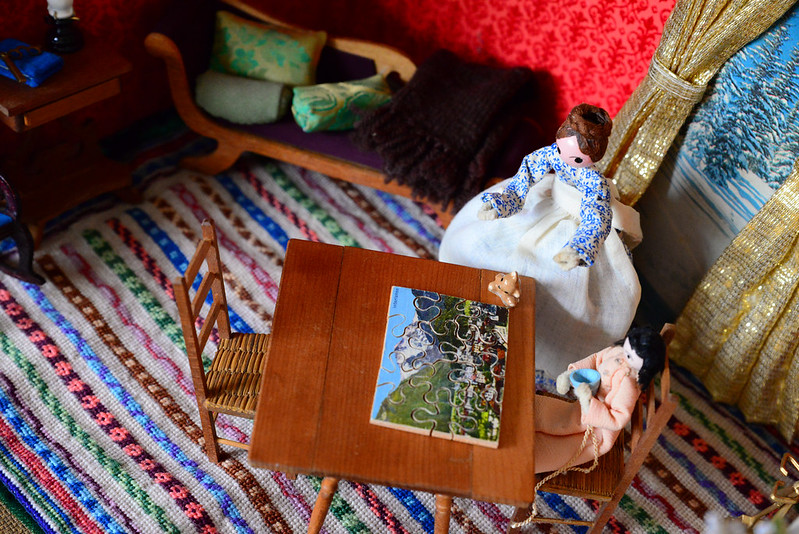 I honestly don't think so. In fact, I think it's often necessary. 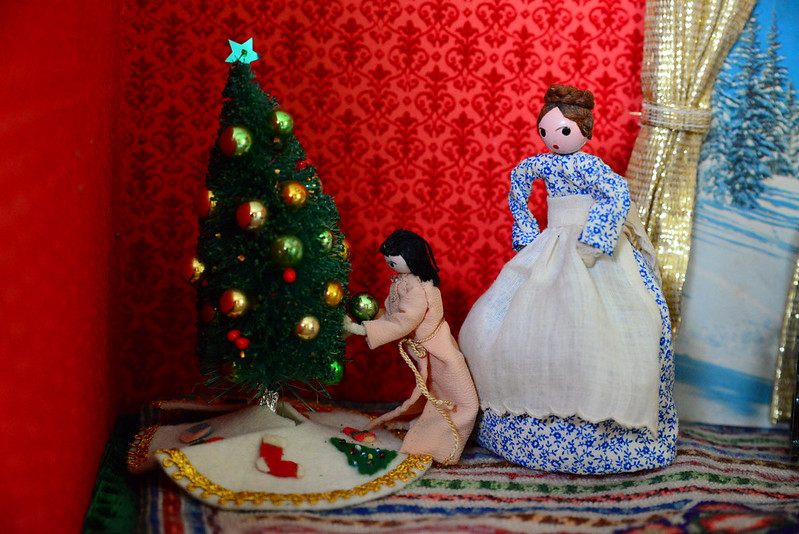 No one meant any harm by calling Aunt Molly a "spinster" or an "old maid", and if she ever overheard it, she knew that.  They were accepted terms.  But when I was single until I was 35, and had a career and purchased my own home, can I just tell you how glad I am no one called me that? I'd call that progress.  Aunt Molly made a life for herself and was a valued part of a community and our family. She was loved.  I prefer the way I was able to thrive as a single woman a couple of generations later. We are all products of our time. 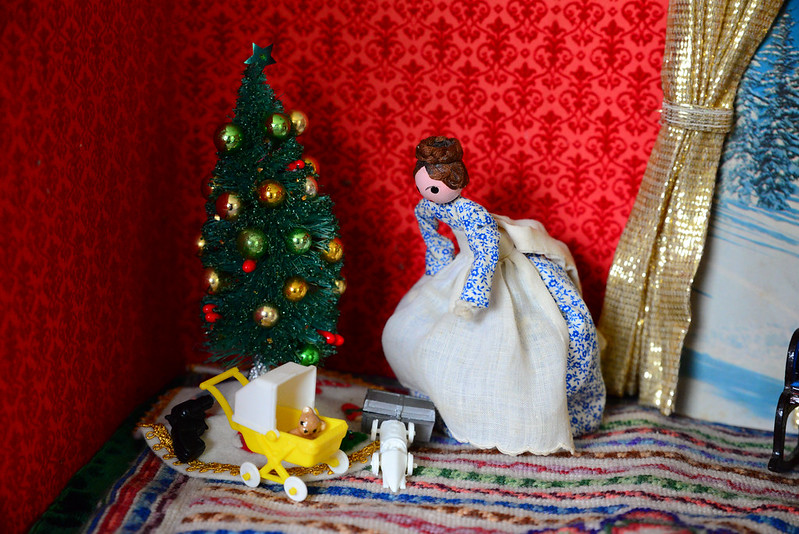 When we have the privilege of growing older, we can see that perspectives change and we can learn new ways that fit our time better. It's still hard for me to imagine the day when generations after me will stop to ponder who I was. When they do, I hope they'll feel free to be honest about my shortcomings, and those of my generation and do better as they write the next chapter in the narrative. I hope they'll also be generous with me, realizing I did the best I could with what I had, in ways that made sense here and now. Maybe, they'll appreciate the value of the gifts I've offered--even if they have to be reframed. 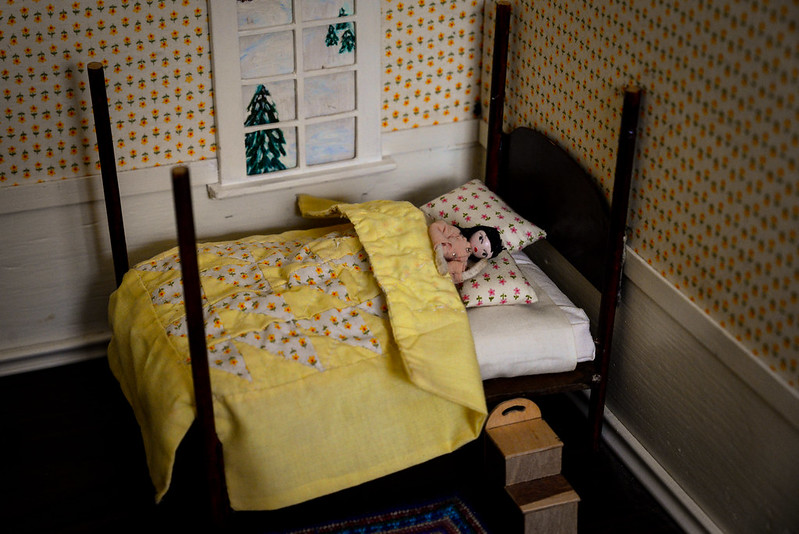 Ultimately, our story is a "choose your own adventure", and each generation steps aside to cheer on the next. But our stories continue on. We honor those who've written the chapters ahead of ours by writing--and living--with intentionality and integrity in our own time and place. 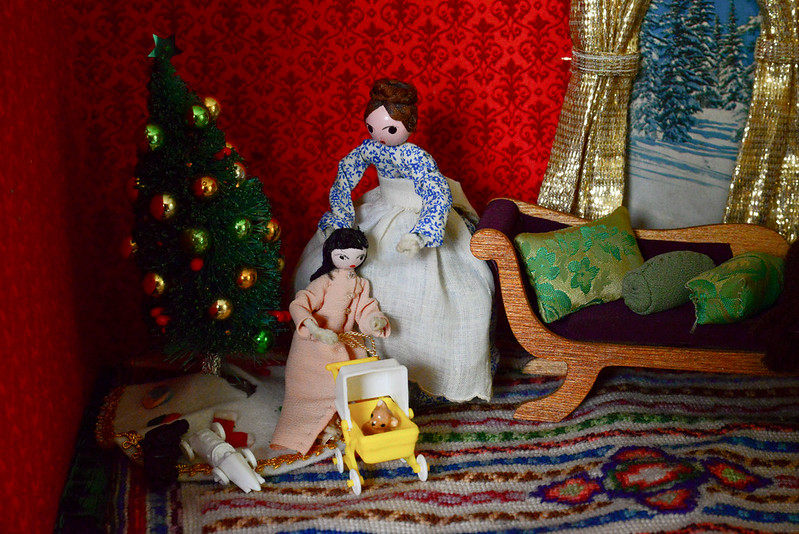 Thanks, Aunt Molly, for delighting in making us something that truly is beautiful. I receive it as the gift that it is (even if I'm not keeping the physical gift). It only took me fifty years.
Posted by Tracy P. at 2:12 PM